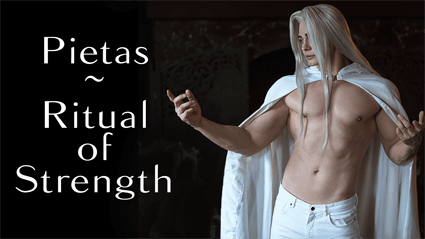 The Ritual of Strength #Video from Bringer of Chaos #SciFi #MFRWhooks

Turn on your speakers!

You will want to hear the music and the voice actor. Zack's performance is exactly the way Pietas sounds in my head.
It's as if this video was filmed in my imagination and brought to life in reality.

When the idea for this video came to me, at first I could not see it as anything more than a wistful dream. It was something that might be amazing but would never happen. If it hadn't been for my assistant, Lisa Lowe's, belief that it could happen, this video would never have been created. I owe her a huge debt.

The cosplayer and model, Nik Nitsvetov, worked diligently to portray the immortal king. I do not think anyone will ever come close to matching his performance. He was magnificent as Pietas. His photographer, Belyaeva Yuliya (known as by_cosphoto), is a master of lighting and shadow. She makes the light itself kiss Nik in these pictures.

When Zack Black speaks the words, he says them with the same cadence, pronunciation, and literal voice that I hear in my head. Bringing these two men together to create this video is nothing short of a miracle, and I do not throw that word around lightly.

It took months of behind the scenes work, planning, buying costume pieces, writing the script, talking with the performers, tweaking every aspect of this film. It's just under two minutes of screen time, but represents hundreds of hours of work. I sincerely thank all those who helped me make this a reality.

I hope you will watch to the end and share it with your friends.

Pietas ap Lorectic, Immortal King performing the Ritual of Strength featured in the Bringer of Chaos series
Ritual of Strength performed by Nik Nitsvetov
Voiceover performed by Zack Black
Images courtesy of: Nik Nitsvetov and @by_cosphoto
Based on the Sci Fi series Bringer of Chaos by Kayelle Allen
Music: Coming of Time by Orchestralis, licensed via Dual Horns Studios Ltd

The Pietas Ritual of Strength

I am Pietas.
First Conqueror.
War Leader of the Ultras.
As fire has victory over life, so I have victory over my enemies.
I am powerful, as fire is powerful.
I own the wind -- I prevail over the breath of my enemies.
Water submits to my presence the way enemies submit to my will.
The blood of my enemies trickles into the pool of time, is absorbed, and forgotten.
My body submits to my will.
No pain defeats me.
No fear touches me.
My will is absolute.
I am bigger than any fear.
I prevail in every circumstance.
I face every foe.
I vanquish every enemy.
I overcome.
I am indomitable.
I am invincible.