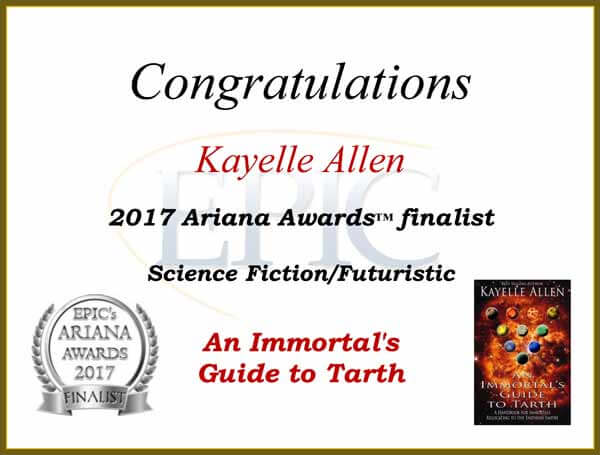 An Immortal’s Guide to Tarth: a Handbook for Immortals Relocating to the Tarthian Empire is a finalist in the Electronically Published Industry Coalition (EPIC) 2017 Ariana Cover Awards. Members of EPIC vote to determine the shortlist and winners. See the full cover and longer excerpt here.

My son, Jamin Allen, created the planets on the front. I did the rest. I share this award with him.

The guidebook is a tongue-in-cheek look at what relocating to the Tarthian Empire would be like for the immortals in other books. A bit of fiction, written in a non-fiction way, the book offers guidance from Joss Avaton, one of the immortals. Provides dire warnings about who not to cross, and what to do about pesky Mundanes (namely, those annoying humans), and who among the Chosen is not to be trusted.

The role playing game of Peril is spelled out, with downloads for character sheets and rules. Includes a who’s who among the immortals, and stats of the players, with never before revealed secrets about Luc Saint-Cyr, Pietas, and others.

Review: “A must have for fans of the Tarthian Empire series. This handy guide will inform, entertain, and provide peeks behind the curtain.”

The guide to Tarth was inspired by the game Peril, played by the immortals. Once their game-life ended, they would have to move on. I thought a guidebook would be something they’d all like to get upon arriving in their new place.

Here’s a short excerpt from the first chapter:

By order of Pietas, humans and other people groups may not be killed for sport. That does not mean you can’t annoy, manipulate, and use them for your own purposes. However, the rule about killing is strictly enforced. You can be banned from the Empire for killing even one Mundane. Justifiable homicide must be proven in Mundane courts as well as before the throne of Pietas.

It has nothing to do with their inherent worthiness. Mundanes have none. However, we must coexist here and the worlds in the Tarthian Empire are filled with these creatures. They farm, raise fish, cattle, sheep, and other animals used for food, create cities, technology, transport, and other items which we find useful and helpful. Since we take full advantage of these things, it behooves us to let them exist. Therefore, the golden rule is “Live and let live.”

We cannot stress strongly enough the need to remember the golden rule when it comes to Mundanes, and especially humans. They tend to bring out the worst in us, so guard yourself against rash behavior in their presence. Pietas does not permit a “temporary insanity” defense. I know this chafes. You must learn to deal with it.
—
Any immortal moving into the area would have to abide by rules. The first of which, supreme above all others is “Because Pietas says so.” This little guide to Tarth makes that abundantly clear.

Joss Avaton is a major character in Bringer of Chaos: Forged in Fire, which is a work in progress. She’s a master telepath who can crush a windpipe with one thought. Good thing she’s also patient and lives by a strict code of honor.

An Immortal’s Guide to Tarth is available at numerous locations, including Amazon and is also in print. You can get an autographed copy on this website.