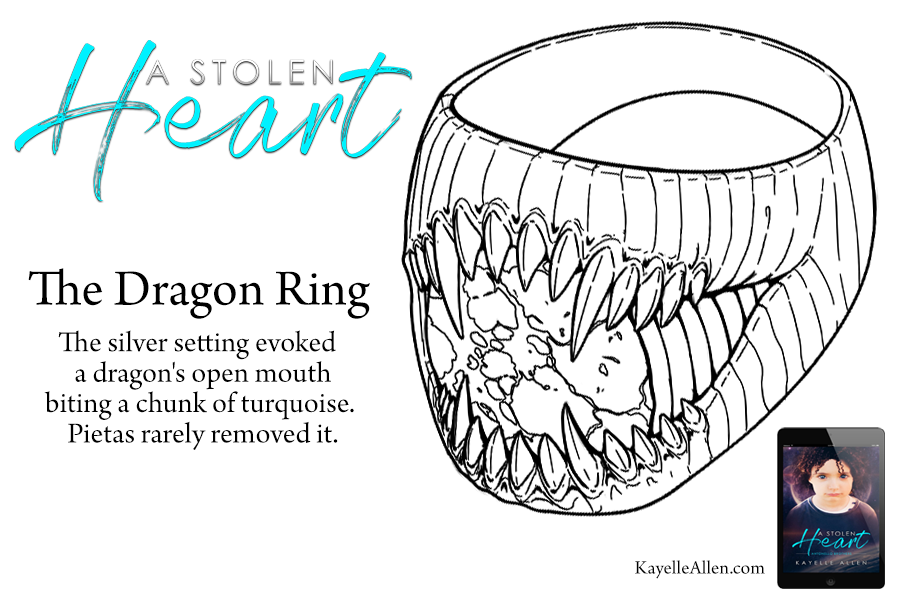 I'm a visual person. I like having an image of something I'm writing about. In fact, I frequently comission the book cover before I've finished writing the story. Sci-Fi concept art is a must for me, and I have a ton of it.

The ring in this image belongs to Pietas, the immortal king in A Stolen Heart and the Bringer of Chaos books. Here's how it looked in its various stages of design. Music in the video is Video Game Blockbuster, licensed via Dual Horns Media Ltd. The concept art is by Nano-Core.

In this scene, the immortal king Pietas and his general, Luc Saint-Cyr, are hashing out an issue. This is the first mention in the book of the ring Pietas so often wears.

"I'm touched." A playful smile lit Pietas's face. "You worried about me?"

"I worry whenever you do something different."

"Let's see." Luc ticked items off his fingers. "Send troops over a border. Incite a riot. Invade a planet. Invade some king's daughters. Or his sons... Shall I go on?"

Pietas chuckled. "You worry a lot."

To increase his personal space, Luc adjusted the hang of his jacket. "You're in a good mood."

"Yes, yes." Pietas brushed a dismissive hand through the air. "I haven't triggered a war, if that's what you're fretting about. I'm not sending you out of the Empire, and I'm not planning to feed you to my cat."

"No," Pietas agreed, with a bemused expression. "Although if there's someone you want to be rid of..." He lifted one brow.

"No, no, quite capable of making people disappear on my own, my lord, but I'll keep a personal dose of panther justice in mind."

"Panther justice!" Laughing, Pietas laid a hand on his chest. "How I've missed your sense of humor. I don't recall the last time I laughed out loud." He looked down, toying with a turquoise ring.

The fat nugget of fractured stone occupied his left forefinger. The silver setting evoked a dragon's open mouth, a gift from Luc hundreds of years ago. Pietas rarely removed it.

Did he cling to their past relationship, or wear it to show Luc he hoped for the future? Either way, Luc could not reconcile being with this man with the desire for freedom. To give birth to one meant the death of the other.

"You know," Pietas twisted the ring, "I think the last time I laughed, I was with you."

Pick up a copy of A Stolen Heart, now live on Amazon.