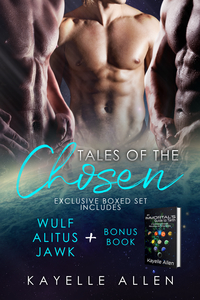 Choose Me Sep 18th at the #Facebook #Party #SFRTG

In the secret society of the Chosen, a group of mortals who serve the immortal Sempervians, being gay or straight is no different from being brown-eyed or blue-eyed. No one notices or cares. But disloyalty among the Chosen is punishable by death, and in this trilogy, everyone’s loyalty is questioned.

Covert alignments, mistrust, mistakes, and regrets pepper the playing field. Both the Chosen and the Sempervians harbor enemies and spies within their ranks — some known and tolerated, others concealed behind layers so convoluted eternity isn’t long enough to figure them out. When you factor in multiple allegiances and aliases, knowing who to trust takes on a whole new level of danger — especially if you live forever.

Includes Bonus Book: An Immortal’s Guide to Tarth; A Handbook for Immortals Relocating to the Tarthian Empire

A bit of fiction, written in a non-fiction way, An Immortal’s Guide to Tarth offers guidance from Joss Avaton, one of the immortals. She provides dire warnings about which immortal not to cross, and what to do about pesky Mundanes (namely, those annoying humans), and who among the Chosen is not to be trusted.

Excerpt from An Immortal’s Guide to Tarth

This excerpt is taken from the opening of the book.

Welcome to the Tarthian Empire. This book is a guide to the people, places, and possibilities you’ll find here. A list of immortals and their roles in Peril is also included. All Sempervians are welcome here. This will be your home away from home. To those immortals who have joined us in our glorious exile — please know you are our honored guests. We are pleased to share the bounty of the Empire with you.

I’m Joss Avaton, your guide. A little about me. I’m telepathic (which most of us experience and understand), and a scripter, which means by touching you I can discern your abilities and gifts. Contrary to popular belief, scripters cannot tell your past or your future. We can only tell about your present: what gifts you possess now. 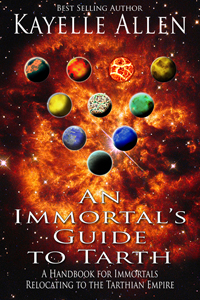 So that neither of us has any illusions, I will tell you up front that I am serving Penance. For those of you new to the game of Peril, that means I lost a game and must pay for it. In my case, it was a technicality, and the gamers in my session had nothing to do with my loss. I lost by my own mistakes, and take full responsibility. The gamer opposite me (Nanchonta) I would trust with my life, and have, many times. However, I would carefully watch the lead player in my support team (Akaghe) and never turn my back on him. Not for one moment. He is not based in the Tarthian Empire, for which I’m thankful. But enough about the past. I’m here to help you in your future with us.

While we are more than glad to welcome a fellow immortal into the Empire, you should be aware that the relationship between Mundanes (mortals) and ourselves is not an open one. To that end, let’s dive straight into the ironclad rules.

Rule Number One: This Book is for Immortals Only

By order of Pietas ap Lorectic, Lord of the Immortals, the Impaler, Hammer of God, Marauder, Soul Ripper, Destroyer of Worlds, Slayer of Innocents, Hound of Hell, you are ordered to set aside this book if you not immortal. Put down this book, walk away, and no one will get hurt. Should you decide to disobey this directive, that assurance is void.

With that warning in mind, you may proceed at your own risk.

Of course, immortals do exist. The fact that you are reading this book proves that. We are referring to what the non-immortal Mundane population thinks. They (other than the Chosen) are never to know of our existence. The rule regarding how much to reveal is simple: nothing.

We do not discuss immortality.
We avoid any mention of immortality.
If asked directly if we are immortal, we lie.
There are no exceptions to this rule.

The answer to “Why can’t we tell them?” is also simple: BPSS (Because Pietas said so). If you don’t know who Pietas is, we refer you to Rule Number One.

You will no doubt find yourself exasperated by the sheer number of Mundanes present in the Tarthian Empire, especially humans. They have overrun it and multiplied like rats in a pestilence. Which brings us to Rule Number Three.

By order of Pietas, humans and other people groups may not be killed for sport. That does not mean you can’t annoy, manipulate, and use them for your own purposes. However, the rule about killing is strictly enforced. You can be banned from the Empire for killing even one Mundane. Justifiable homicide must be proven in Mundane courts as well as before the throne of Pietas.

It has nothing to do with their inherent worthiness. Mundanes have none. However, we must coexist here and the worlds in the Tarthian Empire are filled with these creatures. They farm, raise fish, cattle, sheep, and other animals used for food, create cities, technology, transport, and other items which we find useful and helpful. Since we take full advantage of these things, it behooves us to let them exist. Therefore, the golden rule is “Live and let live.”

We cannot stress strongly enough the need to remember the golden rule when it comes to Mundanes, and especially humans. They tend to bring out the worst in us, so guard yourself against rash behavior in their presence. Pietas does not permit a “temporary insanity” defense. I know this chafes. You must learn to deal with it.
—
Well, fellow mortals. Will you choose to obey the directive and avoid the book? Or will you crack that baby open and grab all the secrets you can find? Choose…
—
Both books are available as preorders until Sep 17th. The cost for each is just 99 cents. They will go up after Oct 1st, so grab them now. If you buy the boxed set, you get An Immortal’s Guide to Tarth free. If you already have the Chosen series, just grab the single book.

Want to know how I write before you decide to buy? Download Bro, the Story Behind the Antonello Brothers free. You’ll get another free book the next day. That will give you a good look.

Every author on the list has a giveaway! Come find out about new books, win prizes, and meet authors. The authors in this group write Male Male Romance, or Menage Romance. Which will you choose?