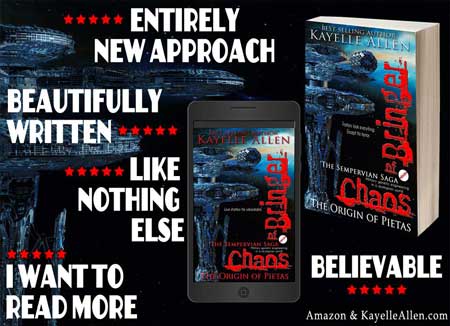 One way writers allow readers to connect with a hero is to give him serious character flaws. In  Bringer of Chaos: the Origin of Pietas, Pietas begins as an arrogant narcissist with a superiority complex. He is sooo above puny humans… but in this book, his immortal life could end when he winds up at the mercy of one.

In this scene between the immortal Pietas and his father, the two are arguing a familiar topic: humans. To establish the main character’s chief flaw, it’s important to reveal it as close to the opening as possible. This conversation begins on the first page, but we join it here a few pages later. Pietas is speaking.

“You want us to treat humans as equals. They never treated us as such. Even now, we’re hated and reviled. Putting them on the council will make them haughtier. I want nothing to do with humans.”

“Then you want nothing to do with me, Son. Humans are all I care about.”

“You’re right, Father. I want nothing to do with you. I care nothing for mortals. They all die.”

“You were elected by the council and you serve at their pleasure.” He jabbed a finger at the ground. “They want this treaty. Remember that.”

“I never forsake duty.” Pietas twitched his fingers, dismissing him. He waited until Mahikos reached the door. “Did it never occur to you?”

His father faced him. “What?”

“The council elected me to head these talks and removed you. You want to bring in humans. I do not. Perhaps the council hates humans more than you think.”

A wave of aggravation emanated from Mahikos. Licks of emotional flame scorched Pietas’s skin. Accustomed to the pain, he did not flinch.

“Son, surely you realize they elected you to keep you close and control you.”

“To control–” Pietas broke into laughter. “Did they? How unenlightened.” He shrugged. “Well, they can try. I must say, your annoyance today is a refreshing change from your usual indifference. I’d begun wondering if you had any emotions regarding my takeover. It must nettle, knowing your lowly son succeeded your rule.”

“No one would consider you lowly.”

Pietas lifted his chin. “Except you.”

“I’m surprised you even bothered to show up, as much as you hate humans.”

“It’s nothing personal. I hate humans no more than a physician hates germs yet still takes time to eradicate them. Humans are dangerous.”

“Humans are the reason we exist.”

“How well you preach love.” If only his father gave it half as well.

“I’m certain I already am.” He toyed with the circlet. “Just this morning when I knocked on your chamber door, I heard Mother say, ‘Oh gracious. That must be Pietas.'”

Okay — now tell me, aren’t you irritated with Pietas right now? If I’ve done my job as a writer, you will be. However, as you walk in his shoes (or lack of them) through the rest of the story, you’ll gain an insight into his arrogance and his hate-love-hate relationship with his father. One reviewer wrote that by the end, she loved this man (Pietas) she had been driven to hate.

Writing a character with serious flaws is like buying a diamond in the rough. You know the gem is in there. It takes time to grind and polish down to the good part.

Bringer of Chaos: the Origin of Pietas is free on Kindle Unlimited.

The sequel to this book, Bringer of Chaos: Forged in Fire is almost complete! To learn when it will be released, join the Romance Lives Forever Reader Group or follow me on Amazon. Joining the reader group provides immediate access to four free books, including one beautifully illustrated with quotes from Pietas.