Insights into characters and how they act or react.

In this scene from Bringer of Chaos, Pietas discovers a critical truth. He is plunged into an empathic rage that unleashes his emotions on the world. Everything changes. The scene below picks up after the reveal so as not to include spoilers. Pietas ventures into the night alone on Sempervia.

To celebrate the launch of Bringer of Chaos: the Origin of Pietas I’m sharing 30 Days of Chaos. Each day during April, I’ll post one excerpt from the book, along with a poster of a quote by Pietas. On the final day, members of my Romance Lives Forever Reader Group will receive a full color book containing all the quotes and posters. Unlike my website, the book posters will have only a quote and a beautiful image. Look for another giveaway at the end of this post. 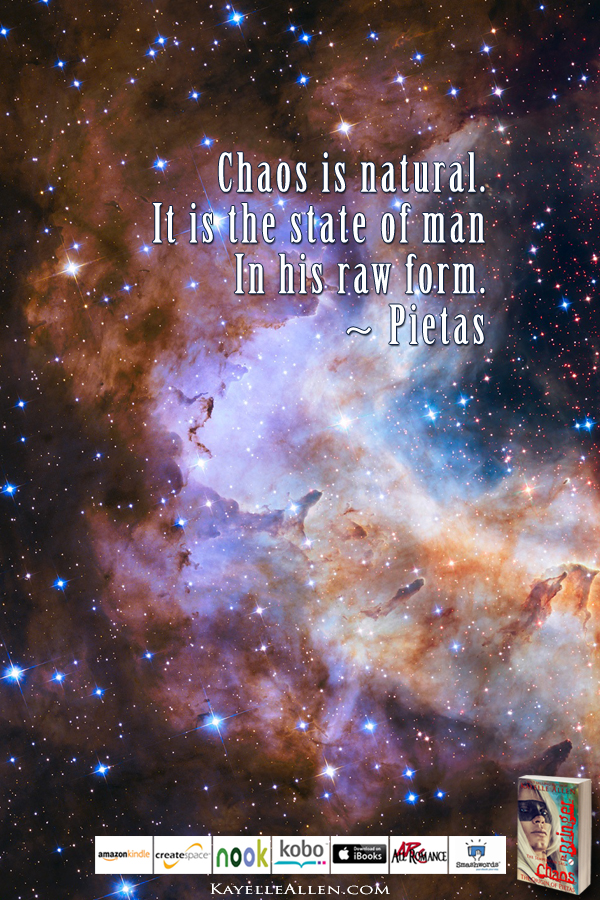 Lost in thought, Pietas walked for hours. He became aware of his surroundings in the center of a clearing. Sempervian moonlight bathed the night in silver. He’d learned the secret. Now, how could he face the truth about ghosts? He’d begun to have second thoughts about humanity. Since getting to know Six, he’d considered the wholesale slaughter of humans might be wrong. That his father might have a point, and humans might be worth saving.

He’d considered resigning himself to life on Sempervia. Leaving humanity to its own devices.

He would go back if it cost him every vestige of strength, and make humanity pay for what they’d done.

He would kill every last one.

All of them. Every. Single. One.

The moon darkened behind a cloud of insects.

A torrent of nesting birds roused and with terrified wings, beat the sky.

Pietas threw back his head, flung out his arms, and poured forth a silent howl of empathic rage.

—
Bringer of Chaos: the Origin of Pietas
Immortal. Warrior. Outcasts. Traitors took everything. Except their honor.
Preorder on Amazon http://amzn.to/1R8DAbb (Out May 1, 2016)
Read now in print on CreateSpace http://bit.ly/boc-origin-csp

How? By joining my Thunderclap or Headtalker campaigns.
For Thunderclap click here: https://www.thunderclap.it/projects/40531-chaos-is-coming
#ChaosIsComing Create chaos and you create opportunity. Pietas; BRINGER OF CHAOS #SciFi #Amreading http://thndr.me/kyeSr9
—
For Headtalker click here: https://headtalker.com/campaigns/chaos-is-coming/
#ChaosIsComing In battle, chaos is a good thing. Especially among the enemy. BRINGER OF CHAOS #SciFi #AmReading https://hdtk.co/LeBAh
—
Review the book or host it on your blog. Sign up here http://bit.ly/1SDr9nj