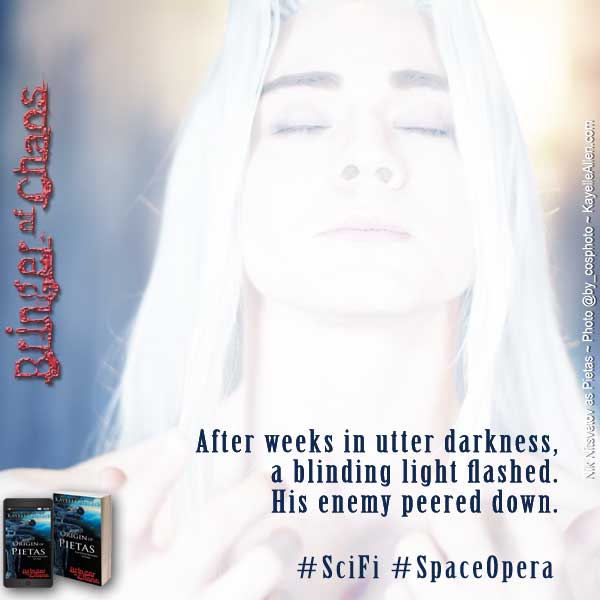 Blinding flash of light: his enemy peered down #SpaceOpera #SciFi

In this scene from Bringer of Chaos: the Origin of Pietas, the hero is trapped in darkness within a lifepod without one spark of light. Rather than being put into stasis, his captors have left him to rot. But there's one small problem: Pietas is immortal.

The infernal, cheerful whistling began again. Pietas tried in vain to escape the sound. Shackled at the ankles, hands bound behind him, he remained flat on his back. There were no comfort choices inside his pod.

No. Not his pod. He would never claim such a place.

The prison pod. The nightmare pod. A casket for the living.

Would that whistling never end?

Whoever guarded him whistled, night and day. He must have lips made of steel. How a human kept that up day after day was beyond him. Or perhaps... Did an Ultra guard him? Had one of his people come to free him?

Pietas opened his mouth to call out, and clamped it shut.

If it were one of his people, he needed to wait for them to act. They would do so when the time was right. For now, he suffered bouts of agony as feeling returned to his hands and then left in repeating cycles. His metabolism healed him, but brought pain. He focused on that, accepted the pain, welcomed it, and examined every step of its journey through his body. What one understood, one could bear.

An Ultra does not seek to escape pain. If one inflicts pain, one must bear it. Pain must be borne. Pain is a warrior's ally.

He hovered in a nightmare-filled, windowless, endless monotony of thirst and hunger.

At first, he'd welcomed the sound. The rising and falling notes broke the tedium of everlasting darkness. It stopped for brief periods, but began again soon after.

He'd considered calling out and asking them to stop. He had gone so far as to open his mouth. But asking implied weakness. He acknowledged no tool of torture.

This was not stasis. Stasis meant cessation of thought. Of emotion. A dreamless kind of sleep. The end of awareness. A not-time.

They'd frozen his people in these pods, but they'd imprisoned him.

Or perhaps his blood ran so hot, no human force could freeze him.

For the love of all that's holy, will you shut up!

Blessed silence fell. But then a blinding flash of light blared in his face like a blast of horns.

Pietas tried to force his eyes open, to face the torture, but after so long in darkness, the light stabbed his eyes. He twisted his head to avoid it.

The alarm in the male voice gave Pietas a measure of pride. Even imprisoned, he engendered fear. They had taken away his name, and given him a number that among humans meant a demonic beast.

Let the legend of Pietas--by name or by number--bring fear straight into the heart of man. No... let it bring terror.

His eyes adjusted to the light, and he focused on the face hovering over the small window above him.

When the immortal Pietas is marooned on a barren world with no food and few survival tools, he knows it could be worse. He could be alone. But that's the problem. He's not.

Half a million of his people sleep in cryostasis, trapped inside their pods and it's up to Pietas to free them. He can't release one at a time. It's all or nothing. Over five hundred thousand hungry, thirsty, homeless immortals will call on him for rescue and he has no way to answer. 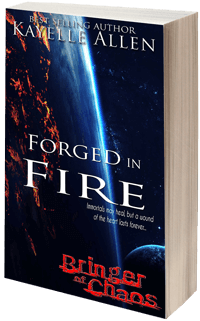